The People’s Bridge of the Sun 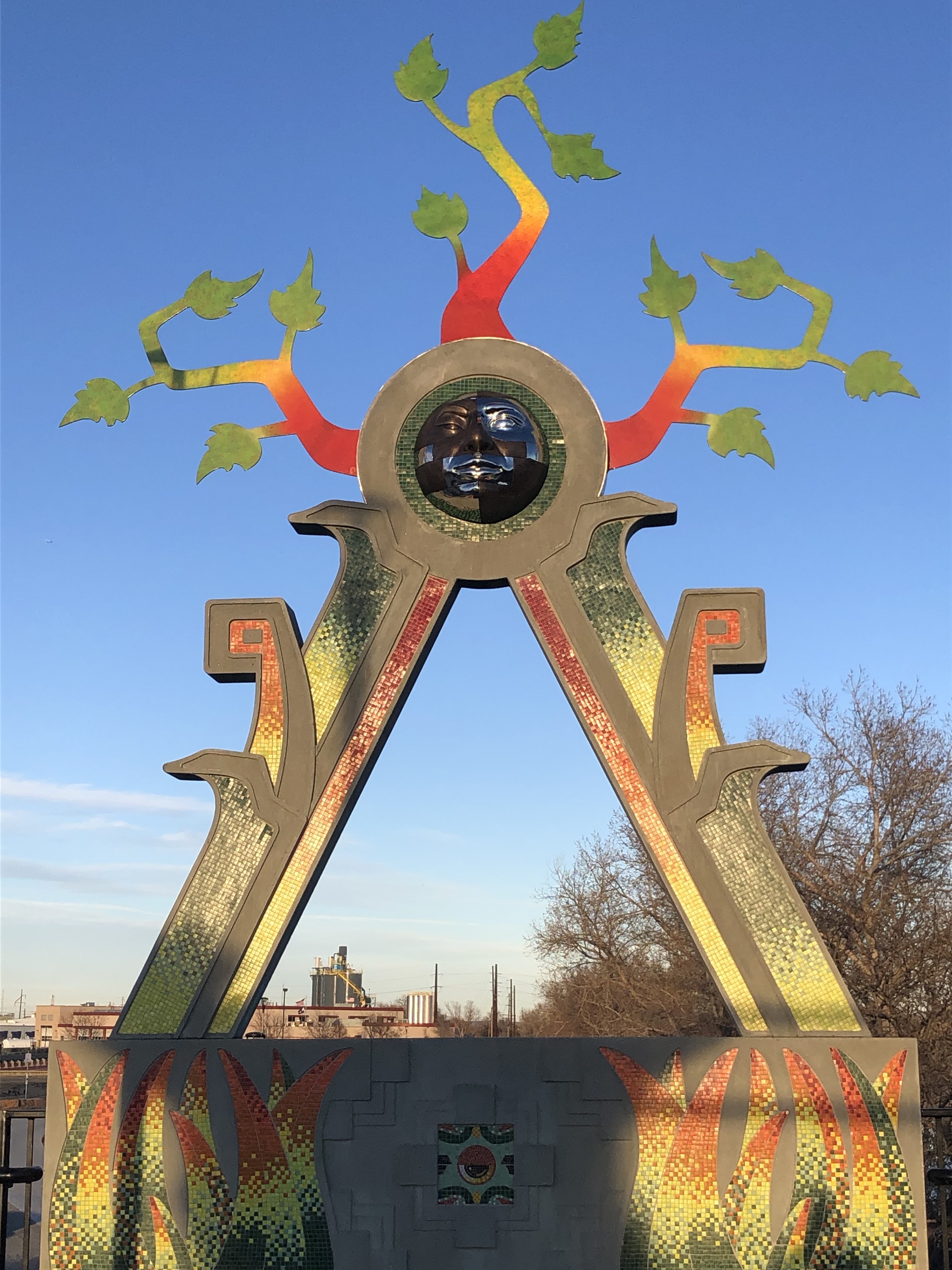 THE ART | EL ARTE
The artwork on the bridges was designed to represent a connection with the Mexican heritage of many long-time—and more recent—area residents, as well as a connection to the larger environment and the cosmos.

The artist’s approach focuses on engaging with the public, in recognition that bridging the river is an act of building community, both among people and with the river itself. David Ocelotl Garcia uses figurative imagery to show that as human beings we come from many different cultural, spiritual and ethnic backgrounds, but ultimately are one people.

Representations of human hands and pottery self-portraits are integrated with other nature-inspired forms to make the bridges both of the people and of the environment.

BUILDING COMMUNITY | CRECIENDO EN COMUNIDAD
Through the creation process, the artists engaged people—especially youth—in discovery and artmaking related to the South Platte River to help them understand more about what they value, their own and other communities, and the environment.

The bridge includes three-dimensional tree sculptures featuring leaves based on tracings of the hands of Denver-area youth, which create a “wooded” setting for the other sculptures. Pottery self-portraits created in community workshops are also incorporated along the bridge.

PEOPLE’S BRIDGE OF THE SUN | PUENTE DEL PUEBLO DEL SOL
Using organic symbolism, tribal philosophy and nature-inspired design, the bridge becomes a space for healing of the mind, body and soul, allowing the viewer to manifest their dreams and aspirations for the future. The art elements are designed to offer viewers meaningful experiences in very different ways, depending on how they experience it: on foot or in a vehicle, from the trail or crossing the bridge.

In addition to a tall central sculpture, opposite ends of each bridge have figures of a horse and a trio of people engaged in struggle. The “loads” they pull are cast from actual artifacts from the National Western Center reclamation project.

The forms in the elements on the bridge grow from David Ocelotl Garcia’s approach to art, which he calls “abstract imaginism.” The People’s Bridge of the Sun is characterized by angular forms representing corn and the sun’s rays in yellows, reds, and oranges. The future People’s Bridge of the Moon at Bettie Cram Drive will feature more rounded shapes, such as wheat and moon rays, in blues and magentas.

THE FUNDING | LA FINANCIACIÓN
The Denver Public Art program was established in 1988, receiving 1% of any capital improvement project over $1 million undertaken by the City to be set aside for the inclusion of art. Funding for The People’s Bridge of the Sun derives from the capital improvement budget for the National Western Center bridges project. As part of the National Western Center development, the 51st Avenue Bridge spans the South Platte River and connects the new campus to the Globeville neighborhood.